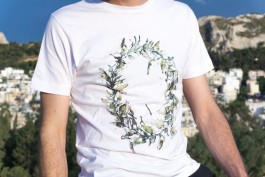 To accompany the exhibition Fantastic Flowers, Drop City collaborated with Matthias Lahme on a special edition t-shirt which featured as part of the exhibition.

The heavy cotton t-shirt with dye-sublimation reproduction is available in a special edition, exclusively available throughout the duration of the exhibition.

Composed in the space between looking and making, An Athens City Reader draws together imagery and texts that explore subjects of civic life through the lens of two buildings designed and built by unknown structural engineer Yiannis Kontodimas: the vacant Rea Shopping Centre and an apartment building which is also his home.

Throughout 2016 Wright spent time in Athens exploring the city, the legacy of its histories and its current state of economical and political crisis. With newly commissioned texts by Tilly Fowler and Christian Jendreiko, An Athens City Reader considers the narratives we tell about the histories of civilisations and the histories of human beings in their individual and collective identities.

The text Inside the Golden Cage of the Antistructure was commissioned for this book and performed as one of Christian Jendreiko’s ongoing series of spoken word actions at M HKA Museum of Contemporary Art, Antwerp.

The text How to begin was commissioned for this book following a number of conversations between Eleanor Wright and Tilly Fowler around public space, society and the book A Pattern Language.

An Athens City Reader is designed by o-p-e-n-a-i-r.eu
with new texts by Tilly Fowler and Christian Jendreiko in English.

Published in 2017 by Drop City, Düsseldorf and M HKA Museum of Contemporary Art, Antwerp on the occasion of A Gradual Stiffening in a special edition of 100

For SOFT REVOLUTION at Drop City, Düsseldorf artists Markus Karstieß and Christian Jendreiko use the principle of ‘tensegrity’ (conceived by Buckminster Fuller and based on the inventions of his student Kenneth Snelson) to develop an original string instrument, two metres in size.

During their performance, Karstieß and Jendreiko set this ‘force diagram in space’, this ‘helical happening’, this ‘frozen event, that is lifted directly from the vocabulary of an all-motion universe’ (Kenneth Snelson) alongside a set of real-time-actions, drawn thoughtfully from the same source and fixed in a graphic score based on original drawings by Buckminster Fuller for the Buddhist Goddess-Of-Mercy Temple in Penang and the Gliderfoil Pendulum Catamaran.

Drawing on her interest in forms of communal living and working, Katie has created a collection of plates for the breakfast room at Hotel Ufer, Düsseldorf.

The hand-made, glazed stoneware plates are available in a limited edition of 30, each unique and measuring between 24-26cm